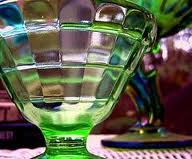 Despite the name,“Depression Glass” actually made its debut in the mid-1920s before the Great Depression of 1929,with some patterns still being produced as far along as the 1950s, did you know that?

The glass — by the trainloads –came during the height of the Great Depression, hence its name.

Most people equate Depression Glass with the “prizes” found in boxes of oatmeal many years ago.

The Quaker Oats cereal company literally saved one glass company from going bankrupt by ordering several boxcar loads of the product during a particularly lean time during the Depression years.

Movie houses gave it away to lure customers in on sluggish nights, gas stations offered it as a reward to patrons frequenting their businesses,and even restaurants used this eye-catching and inexpensive glass to cement relations between new customers as well as their regulars.But most of the Depression Glass sold no doubt came from the numerous so-called “five-and-dime” shops that abounded at the time where housewives could buy much of their basic day-to-day necessities at low prices, somewhat like the precursors to today’s” Wal-Mart and Target giant discount stores.

Some manufacturers produced Depression Glass made with clear glass to “enable revelers to see the bubbling exuberance of their champagne on New Year’s Eve.” Of course, the patterns of these colorless pieces also hid major flaws. And although clear Depression glass had its appeal,most people preferred the colorful pieces to not only decorate their homes, but to use – often on a daily basis. Today, the flaws made in Depression Glass from mold marks and air bubbles help constitute its authenticity, so don’t make the mistake of discounting the value of this highly collectible glass.

The mass production techniques – new at the time – involved in producing Depression Glass caused the flaws we look for today in authenticating the glass.Back in the days when glass producers made Depression Glass, the molds in which it was produced did not last long, causing the glass to accumulate around the edges as the mold got older with use. “Straw-mark” ripples, most often found on the bottom of the pieces, occurred because of these older molds and those,along with air bubbles in the glass, hallmark a true piece of Depression Glass more than any other characteristic. Some manufacturers took to grinding the bases to reduce this fault.
Now that you know what Depression Glass is and a little about its characteristics and appeal, why not start your own collection? As with every type of collecting, the more you know,the better equipped you become to get what you desire.

Same with life I believe.