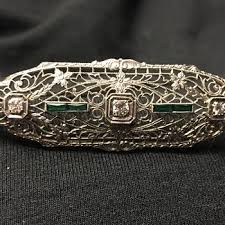 Brooch – is jewelry with a history of almost equal human history. First analog brooches became known as the Bronze Age, over 5000 years ago. Then brooch, or rather its forerunner, had a slightly different design and a different name – fibula. It was often a round or oval metal product with two holes through which pass through a thick pin, brooch fastening with fabric. In the Bronze Age brooches were common in Scandinavia, Hungary, northern Germany, and later in the Iron Age, virtually everywhere in Eurasia. Besides round brooches, were still ringed and simple Clothes pins with ornate tops.

The peasants were simple metal brooches and pins, a rich and noble person could afford gems – diamonds, sapphires, rubies, emeralds on brooches of gold and silver. Glass appreciated along with the stones, so you can often see it next to a piece of jewelry with diamonds or pearls. There were paired brooches, sometimes joining a chain.

In medieval brooch not undergone any changes. But, apart from them, in vogue agraphia – dressed in clothing pins that hold the gate undershirt or simply worn with decorative purposes. On medieval jewelry had more jewels and more complex images: scenes of spiritual and religious content, animalistic image – with different animals (in the early days of the image has been awarded a limited number of totem animals), as well as inscriptions, emblems and mottos.

The early Renaissance brooches and agraphia almost gone out of use – due to a radical change in fashion, they are not needed. But in the XVII century, they were back – this time only as a decoration, fastening and decorative drapery folds in clothing. In the XVIII century there were brooches and pendants set freely hanging parts.

If in the early and medieval brooch consists of a small painting, but now it was a small volume figure. Bows, bulk flowers, twigs and flowers, butterflies and even fountains, entirely in the deposits of precious stones, were a necessary part of the rich dresses fashionistas. There were special for hair brooches, brooches for skirts, brooches for corsages, brooches for sleeves. Set to one costume brooches could reach 10 pieces.
In the XIX century brooches played an important role in the court of the Victorian tradition. Velvet brooches fastened around their necks debutantes at balls – except of a cross, it was almost the only acceptable jewelry for young girls, which was published for the first time. When Queen Victoria’s husband, Prince Albert, died, she ordered a special “funeral” brooch in black stone, which had been hidden curl hair prince. After that, some time, “mourning,” brooches were popular with noble widows. As the “gem of atavism” buckle-preserved agraphia – they fastened the royal robes, clothing of the Pope and other traditional ceremonial vestments.

On the border of XIX-XX centuries, jewelry and fashion style captured the art nouveau, or modern. He combined natural motifs and some of the “magic” of the image on the one hand, insanely realistic enamel flowers, trees, insects, and on the other – at least realistic fairy chimeras decorating brooches and dress clips.

By XX century brooch vintage become a symbol, an element of formal and bohemian clothing styles. The modern fashion offers a huge variety of brooches – both in appearance and to the material. With this in any costume brooch will be a place, which will complement and accentuate the unique female image.